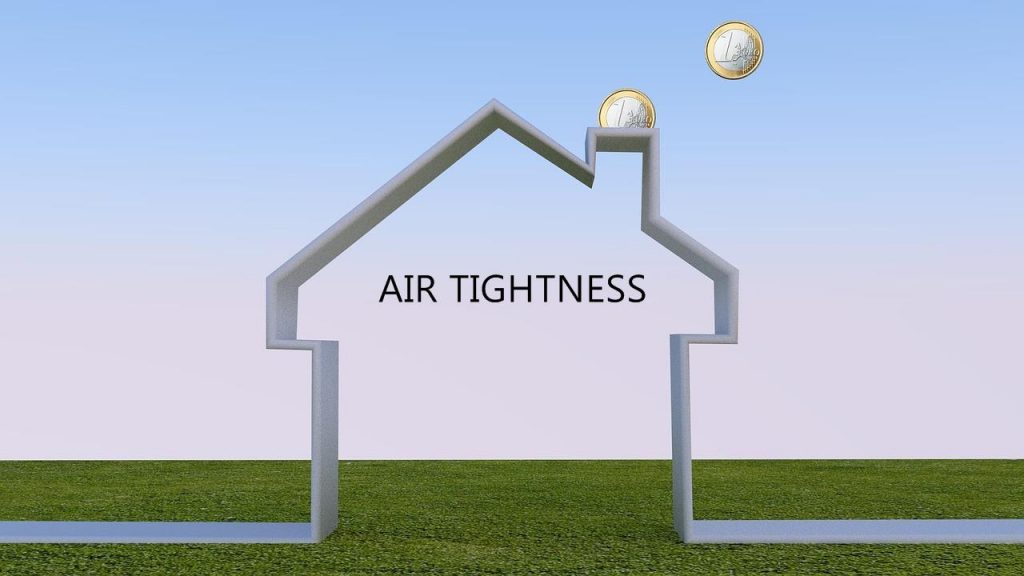 Energy is transferred in 3 ways in buildings; conduction, thermal energy transmitted through a solid; radiation, through electromagnetic waves (heat from fire to air); and through convection, a transfer of a fluid from one area to another. It is this third method that we are discussing in this article, and can have as much effect, if not more, on the energy efficiency of a building as the thickness and type of insulation.

Note that the State of Montana has set a standard and uses the 2012 International Energy Conservation Code (IECC) as the current efficiency code adopted by the state. Consumers and realtors should be aware of this code and understand that in many areas around the state building officials are not enforcing this requirement. It is up to those with a vested interest in the buildings to find out if it was built in compliance with these standards and therefore much more energy efficient.

The 2012 IECC requires that the building official inspect 14 criteria outlined on a checklist. Additionally, a test is required where a blower is used to see how many air changes occur per hour at 50 pascals (Pa) based on the volume of air that a home holds. The 2012 ACH50 as this test is referred to is set at no more than 3 air changes per hour for Climate Zone 6 which is the climate zone for Montana statewide. This blower test has been a requirement of the code since the release of the 2009 IECC.

Many builders throughout the country are trying to achieve a maximum of 1 ACH50, sometimes hitting 1.2 or maybe a little more. Regardless of whether or not they hit their target, they are far exceeding the 2012 standard. There are even companies out there achieving lower than 1 ACH50.

People in this state can expect tighter regulations on wood burning in our larger towns and cities as well as rising energy costs. If we do nothing as consumers to demand greater efficiency in our homes, nothing will be done as contractors are forced to earn your business by cutting corners to compete with others that are doing the same. I know of one town in Montana where the mayor has asked building officials to back off on the enforcement of building codes due to pressure by his constituents. Know that any good builder sees the codes as a minimum standard by which to build and strives to exceed this requirement. Builders could demand enforcement and strengthen their practice and the confidence of the public. If enforced, this would lessen the ability of others that may not bring the same professionalism and genuine concern for their clients to bid on projects that they did not know how to complete properly. I know of one woman that I have had a conversation with that had a new home built by a contractor that underbid the project. The contractor stopped showing up near the end of the project to complete the job and the bank wanted to close. The owner was forced to close on the project prior to completion and now has little recourse to get the contractor back in to complete work left undone. This is a woman that deals with projects on a regular basis, but it was lack of commitment by the bank and Building Official to get all of the work done prior to issuing an occupancy permit that left the family out to dry.

The entire State of Montana is in climate zone 6, a climate criteria by which the code efficiencies are determined amongst other things. Using the 2015 IECC, average energy savings to residential buildings, including multi-family, amounted to $1,225 annually. In the study used for this article, the number dropped to $1,200 using the 2018 IECC as shown by the Department Of Energy (DOE). There was no information in this study for 2012 IECC, but meeting the later standards is certainly acceptable.

Understand that these numbers come from many energy efficiency methods and not air tightness alone. The changes to the IECC did not effect air tightness from 2015 to 2018. Lighting and fenestration where the only two changes which fell into the classification by which the DOE conducted the measures of this study. Know that energy efficiency, like mold resistance, is effective more by a system than an individual material or component.

Consider this scenario: If I were to go and buy a $150 pair of work boots that would last for a couple of years, and in great comfort, protection and style, this would be a great expense up front. If I were able to buy some cheap shoes at a big box store for $15, but needed 10 pair to make it through the same time frame, what would be the better choice. They both cost the same amount, right? Not really. Those $15 shoes will likely be at least a dollar or two more over those couple of years. Possibly they were on sale when I bought the first pair and they are $20 or more from then on. Also, as my toes popped through before I got a new pair each time, they weren’t that stylish and absorbed stains throughout their short lives due to cheap materials. Each time I needed a new pair it required that I also spend money and time to get to the store to make the purchase. This did not always coincide with another trip, and since I went to a big box to purchase the shoes, there is a good chance I also got something I was not really there for, an impulse by. The trip to the ER was inconvenient as well, even if I did have insurance. It would have been unnecessary if I had only had a protected toe on my boots. I am still hurting now and again from that fall I took on those inferior souls too. Value is not always listed on the sticker price.

Demand what you deserve from your state officials. If the building officials are allowed or required to do their jobs properly, you will be better off, even if at first it does not feel like it.